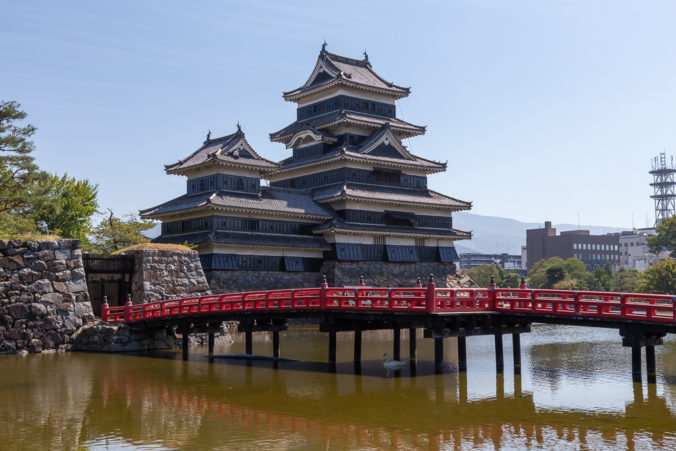 After hiking a section of the Nakasendo Way I returned to civilisation for a day before I went into the mountains.

I arrived in Matsumoto early in the morning, far to early to check into my hotel. They did helpfully take my luggage so I could walk around easily.

There was a class of primary school kids visiting and sketching the castle, every now and then the peace would be shattered by kids screaming “Yoppo” from the top of the castle and then the kids sketching would reply.

After about an hour at the castle my stomach told me it was lunch time so I went in search of food. I discovered a place called Kobayashi Soba, famous for their soba obviously, and on previous recommendation tried the cold soba (it was 30C+ outside). It was so good! Food photos will be in a later post.

After lunch I went for a walk through the nearby shrine and through the touristy shops and stopped when I saw an ice-cream shop. This particular ice-cream shop had a flavour called Niagara Grape, I had to go in and ask about it. An American guy was running the place and unfortunately, they had no Niagara grape ice-cream left. He did recommend another unique flavour they had, Castle Stout ice-cream. He made the mistake of telling me that it was made by a local brewer and that they had a taproom about 5 minutes away.

My task clear, I made my way to the taproom to try the Matsumoto Castle Stout. I stayed long enough that I was able to check into my hotel room when I had finished sampling 🙂

The rest of the night was sorting out laundry, some night photography back at the castle and watching the rugby at a nearby Irish pub. The next day I was heading up into the Japanese Alps so elected to have a relatively early night.